The Best Air and Airsoft Sniper Rifles of 2020

In a market saturated by the variety of rifles, camouflages, and accessories you might naturally feel overwhelmed and give up on trying to find the perfect sniper for airsoft.

Thankfully with the help of our selection now you can choose from the best of the best. But before we get to the snipers themselves we need to define what makes a good sniper rifle and how we decided which one can make it to our selection and which cannot.

By value for the money, I refer to the best quality you can get for the least money spent. Often I consider that it is better to buy average priced items which offer very good quality instead of spending a ton of money on the supposed best and then be unsatisfied that new versions came out and you are left with an outdated model.

Quality as always should be the main concern for every customer simply because cheap products fail/malfunction faster than their quality counterparts thus forcing you to buy new ones or worse, make you abandon airsoft as a hobby.

I previously wrote an article on the best airsoft pistols where accuracy was also a main concern. But when it comes to snipers, accuracy is, even more, an aspect that a manufacturer has to consider. Honestly, there are actually few airsoft sniper rifles on the market which are very accurate.

I definitely prefer a full metal build over a plastic one when it comes to airsoft snipers mainly because metal is more durable, but also because metal is much more realistic. You will see that good replicas after original models are always made of metal.

That’s pretty much it. Let’s see which are the best airsoft sniper rifles on the market. 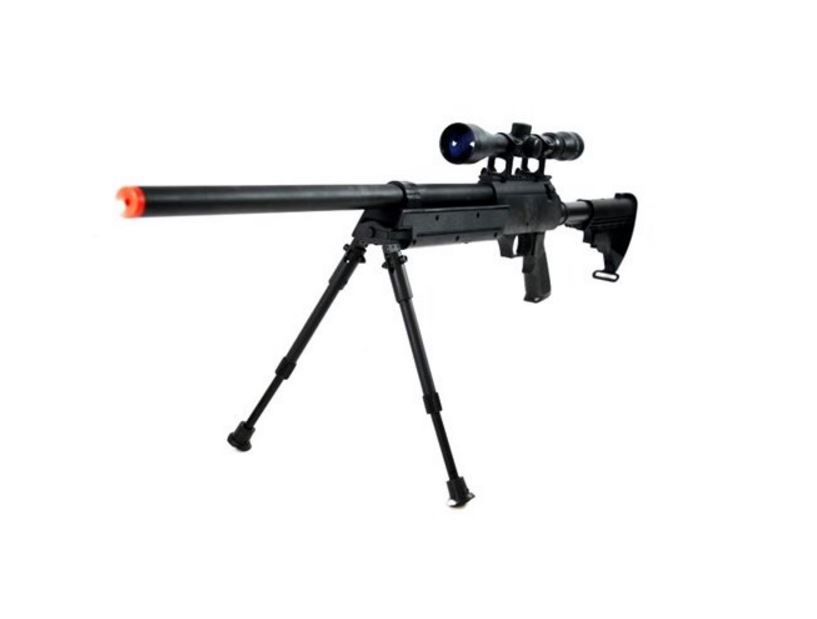 While I have to begin by saying that this is not a perfect airsoft sniper, I think it is a good balance between quality and price.

It is mostly made of metal with some plastic parts although durability should not be a concern under moderate use. But being made of a combination of metal and plastic has its advantages like a relatively small weight, thus making it an easy to carry rifle. And in most airsoft competitions and games you need to be quick and sharp. Once the enemy has spotted you, you can’t stay there anymore especially if you don’t have a pistol or other type of gun besides the sniper.

So versatility is most definitely a quality of this sniper. But what else qualifies it to be in the selection of the best airsoft snipers? Well, a first thing would be the accuracy which is great, way better than I expected. The ability to seamlessly switch hands is also a positive aspect of this sniper. It also comes with a bipod which can increase the accuracy a lot. Worth noting is the FPS which tops at about 470 with the average BBs projectiles.

As said in the beginning this is not an ideal sniper. There are some more or less annoying aspects like the adjustable hop-up or the scope through which you have to aim a little higher in order to hit the target. But considering that the price is reasonable, the positive aspects tend to outweigh the negative ones.

Do you want a quality airsoft sniper rifle, but at the same time not spend a fortune? Then I would recommend this BBTac sniper.

At airsoft competitions, you often have to obey to a series of rules. Among the rules, almost always there will be an FPS limit which will vary from 400 to 500 FPS. This rule was introduced for obvious reasons. To avoid serious damage to the players. Thankfully, this Heckler and Koch sniper rifle replica has an FPS ranging from 430 to 440 depending on the weight and size of the BBs you use. This is ideal in most cases considering how hard it is to find a great quality sniper like this one that doesn’t have an FPS around 1000.

A very interesting feature is the electronic blowback. Every time you shoot an artificial blowback is being created to imitate an original one. While in doesn’t feel as accurate as it was intended to, it is a very well perceived function by the community and by myself. Needles to say now that this is an electric airsoft sniper rifle

It comes with a bipod for easy stalking and great stability, exactly as real snipers have. It is also very accurate, probably more accurate than anything I ever tried before. You can easily fall in love with the way this airsoft AEG feels and shoots.

While the price is a little higher than you would expect, if you are the kind of person looking to be the best sniper on the field/game then this Heckler and Koch AEG is a must.

Often, a good rifle with a quality scope can qualify as a sniper rifle. More or less this is the actual definition of the sniper rifle. Some snipers might have a nonremovable scope and others might be flexible on this matter. Anyway, this is the type of sniper rifle that can convert into a standard rifle whenever you want to remove the scope.

Before anything else, I must say that this is a fantastic air sniper rifle when speaking of build quality and durability. Only quality materials have been used in its manufacturing and so to speak, the manufacturing itself is top notch when compared to other plasticky airsoft snipers. Of course, this is a perfect match for those looking for quality nonetheless. Which I would advise you to do in all situations not just when looking for an airsoft gun. See the beginning of this article where I explained why I think that is the case.

Ok, so the quality is good but what else does this rifle shine at? Well, first of all, it is a .177 caliber which comes at an incredible price tag. I think that is what comes to anyone’s mind when finding out that this sniper rifle is a .177 caliber. Besides this,

Again, I would not consider this to be the perfect sniper rifle, I mean, there are some things which could have been improved like the scope which is not in any way the best in its branch, or the screws which often seemed to be a little too loose. You could tweak both of these inconveniences but I felt I needed to make a point on that as well.

All in all, you can make a great purchase with this air sniper rifle. The great thing is that you can also use it in as many ways as you want, for recreational purposes to scaring away annoying birds. All thanks to its flexibility and reliability.

There are multiple versions of the base model of this Black Ops sniper rifle. The only differences between these consist of having a spring piston or an adjustable bore sight. The notable difference, however, is that there is a version with a 0.22 caliber.

I like this sniper rifle in particular because it has tripod legs. So you can shoot at bigger distances than with most other air snipers in this price category.

Very important to mention that this is a fantastically powerful rifle having an FPS of 1000 and considering it is mostly made out of composite the feel is very genuine, similar to a real sniper rifle. Of course, metal would have been better but at that point, you probably wouldn’t distinguish it from the original.

Don’t make the mistake to think that this is a toy. It is actually a lethal weapon if used properly. It can only shoot metal pellets of the proper caliber, and it has an FPS of 1200 depending on the pellet.

This Black Ops sniper rifle is indeed ahead of its game. It is a high-quality gun for everyone looking to maximize their potential.

Want to read more about airsoft guns or which type of ammo to use? Here are two of my other article: Best Airsoft Pistols and Handguns, Top Airsoft AK47s and Best Airsoft BBs.